Here is Chris Cocchiarella’s summary of the preface of Wilson & Sperber’s Meaning and Relevance. This is part of a series of posts discussing intersections between Relevance Theory (RT) and rhetoric. For an overview of this project, see this post; for definitions of terms and concepts from RT, see this post. -Brian

Under various theoretical influences, from Classical and modern rhetoric to philosophical hermeneutics and linguistic pragmatics, the rhetorical tradition and its practical offshoots such as technical communication have been concerned with the nature of interpretation, which roughly may be defined as the art or skill of expounding or translating meaning.[1]  Sperber and Wilson take up this interest in interpretation and meaning, albeit from a more empirical and cognitive standpoint, as opposed to a merely philosophical and linguistic perspective.  Their take on interpretation, Brian and I will argue throughout our book review, will have implications for rhetoric and technical communication.

Beginning in the Preface of their book, S&W contrast two paradigms of interpretation:  the ‘code model’ versus the ‘inferential model’ of communication.

The code model assumes that communication and thus interpretation works according to a coding-decoding process: a speaker sends an encoded message via a signal, which a hearer receives and then decodes.  (As many linguists and scholars have noticed, this model is essentially one that takes literally the ‘conduit metaphor’ of language, in which ideas are objects, words are containers for those objects, and communication is sending those objects from a speaker to a hearer; Reddy, 1979, 286-292; Lakoff and Johnson, 1980, 10-13).  In this model, interpretation is simply a literal, decoding process.

However, as S&W will repeatedly demonstrate through various examples of linguistic data, “There are always components of a speaker’s meaning which her words to not encode,” which leads them to conclude, “The function of the linguistic meaning of an utterance is not to encode the speaker’s meaning, but to provide evidence of her meaning” (Sperber and Wilson, 2012, ix).  Breaking from the code model, then, they propose an inferential model of communication that builds from work by H. P. Grice: communication involves an element of encoding and interpretation an element of decoding, but such codes do not necessarily signal meaning per se; codes help make explicit linguistic evidence, which hearers use to infer the implicit meanings of speakers’ intentions.

The inferential model, unlike the code model, involves a dynamic continuum of explicit codes (explicatures), implicit inferences (implicatures), and intermediary levels in between (strong and weak explicatures and implicatures) that constitute communication and interpretation.  Thus, the inferential model is cognitive (and, as we shall see, highly rhetorical) in addition to linguistic, because it includes non-linguistic mental representations along with linguistic forms (see especially Chapters 2 and 7, including the illustration from Chapter 7 below). 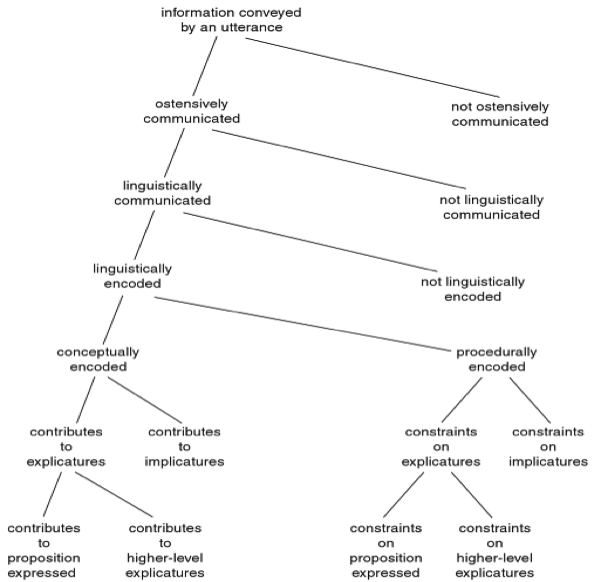 Illustration of the inferential model of communication, demonstrating the relation between linguistic forms and mental representations involved in communication and interpretation (Wilson & Sperber, 151)

In this model, interpretation may be described best by inferential pragmatics, in which a hearer infers a speaker’s meaning based on a constant mutual adjustment between explicit and implicit content, or explicature and implicature.  (S&W will also argue that such inferential processes are ‘non-demonstrative’ and more comparable to intuitive heuristics, not rational acting.)  This mutual adjustment will be what Sperber and Wilson preface as “the most fundamental aspect of pragmatics—the joint inferential processing of an utterance and an open-ended context,” because “pragmatics is first and foremost about a process, and not about a set of abstract formal relationships between linguistic meaning, context and intended meaning” (x).  Highlighting pragmatics in this way, they begin to develop their version of the inferential model of communication and interpretation, which they call Relevance Theory (RT), starting with an inferential account of pragmatics.

Lakoff, George and Johnson, Mark.  (1980). Metaphors We Live By.  Chicago and London: University of Chicago Press.

Reddy, M.J.  (1979).  “The Conduit Metaphor: A Case Of Frame Conflict in Our Language about Language.”  In Metaphor and Thought.  Ed. Andrew Ortony.  Cambridge: Cambridge University Press.

[1] As Steven Mailloux points out, the etymology of interpretation comes from the Latin, interpretatio, which signifies “not only ‘the action of expounding, explaining’ but also ‘a translation, a rendering.’  In Latin rhetoric, interpretatio referred to ‘the explanation of one word by another, the use of synonyms’”  (Mailloux, 1995, 121).

8 thoughts on “Meaning and Relevance: Preface”