My spouse and I took a tour along part of the Western Front of WW I in Belgium and France this month. I did not, as I had hoped, post reflections along the way, as it turned out to be more work bicycling 40-70 km per day than I thought it would, especially on chilly, rainy days. I posted the following materials, making up Part 1 of my reflections, on Facebook during the journey. I’m gathering them here for friends and colleagues who are not Facebook “friends.” Part 2 and maybe subsequent parts will come later. (All photos are ours, Copyright 2016 Brian Larson and Robert Tendal, unless otherwise indicated. Contact us for permission before using.)

In and near Ypres

On June 16 and 17, we were in and near Ypres/Ieper, a location important throughout the war. For those of you who know the poem “In Flanders Fields,” these are those fields. We were in the “In Flanders Fields” museum and attended the daily Last Post ceremony under the Menin Gate, pictured here, on June 16 which happens at precisely 20:00hr every day. 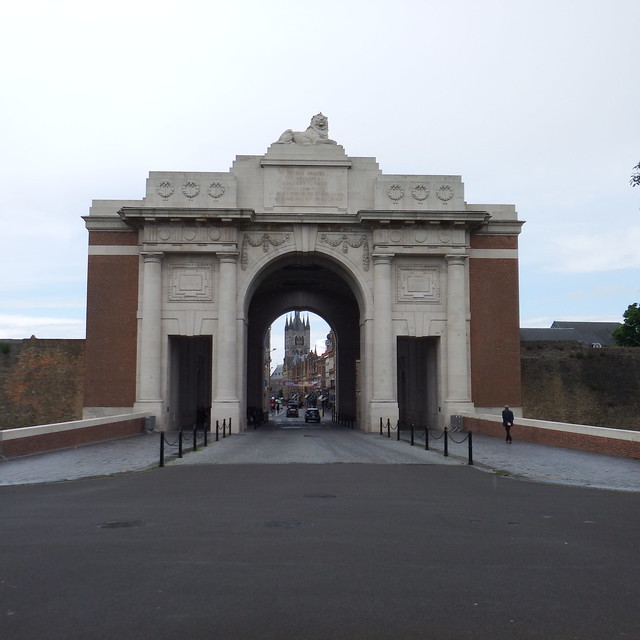 It is a quiet, solemn occasion, with hundreds of folks respectfully witnessing. A single lector recites lines from “For the Fallen,” by Laurence Binyon:

“They shall grow not old, as we that are left grow old:
Age shall not weary them, nor the years condemn.
At the going down of the sun and in the morning,
We will remember them.”

The deep voice of the crowd repeats the poem’s last line:
“We will remember them.” 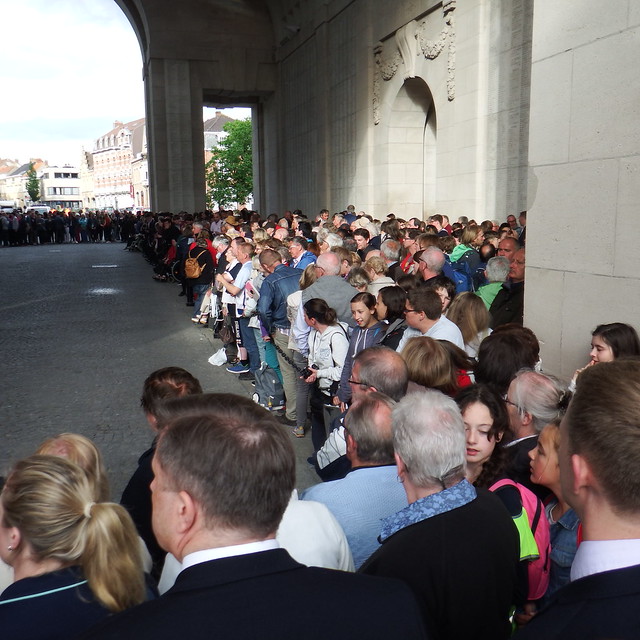 Perhaps the most famous war poem ever, John McRea’s “In Flanders Fields” commemorates the deaths of many young men. Writing in 1915, McRea could have had no idea how many more young men the poppies would later commemorate in their blowing. McRae’s language is lovely, but I feel somehow that it is still glorifying war: “If ye break faith with use who die….” In fact, it was used as a public relations tool in increase volunteer enlistment throughout the British Empire and Commonwealth. I’ll post a couple other poems that I think are equally beautiful but show the more complex face of the war. Still, McRea’s words deserve a place of honor:

In Flanders fields the poppies blow
Between the crosses, row on row,
That mark our place; and in the sky
The larks, still bravely singing, fly
Scarce heard amid the guns below.

We are the Dead. Short days ago
We lived, felt dawn, saw sunset glow,
Loved and were loved, and now we lie
In Flanders fields.

Take up our quarrel with the foe:
To you from failing hands we throw
The torch; be yours to hold it high.
If ye break faith with us who die
We shall not sleep, though poppies grow
In Flanders fields.

Looking at Ypres now, you could not possibly imagine the waste in which it lay at the end of the War. The pictures you see here are an idyll, a medieval town reconstructed in its pre-war image. 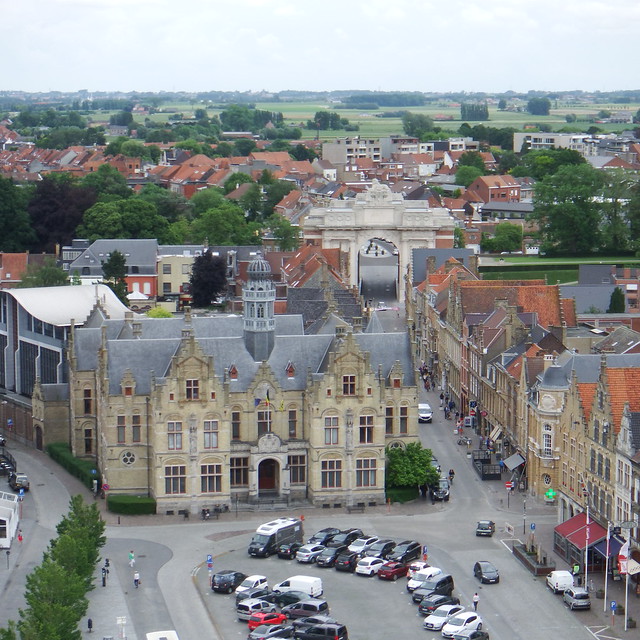 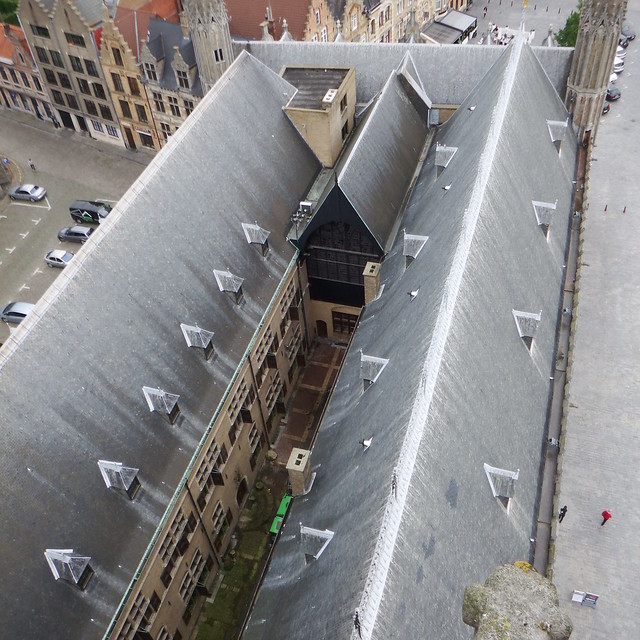 It’s beautiful, and yet it’s a haunting reminder of the way that modern warfare begs us to imagine ourselves in a time before, a time that maybe never really existed, but that comforts us nonetheless.

The Menin Gate Memorial, however, helps to shatter that illusion. Among the 54,000 names on the Menin Gate memorial in Ypres, names of men whose bodies were never found after WWI, is that of T.P. Ward. I’m no relation to him (other than as a human being). Someone thought to decorate it with a poppy. 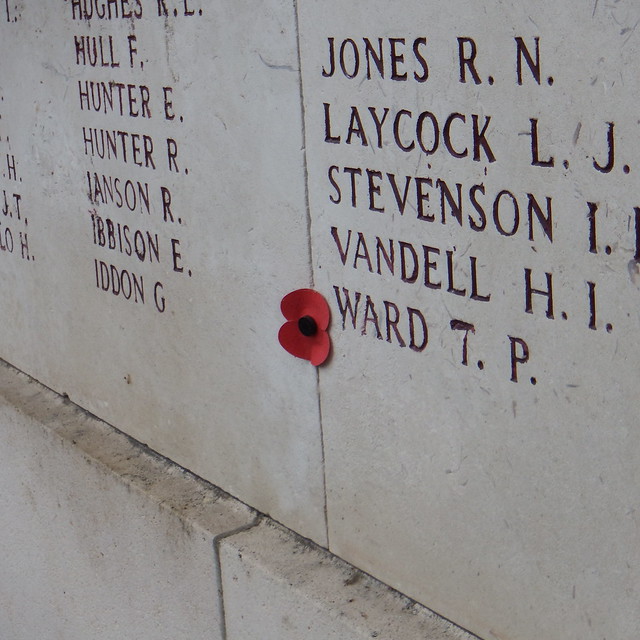 Near Ypres and the Menin Gate is the Tyne Cot Cemetery and Memorial, where many men are buried, but another 35,000 are commemorated on the wall whose graves are not known. Remember that World War I was described during its era as the “war that would end all wars.” This epitaph on a soldier’s tombstone–provided by his parents after the War–at the Tyne Cot cemetery is a fitting rebuttal of that ‘argument’: “Sacrificed to the fallacy that war can end war.” 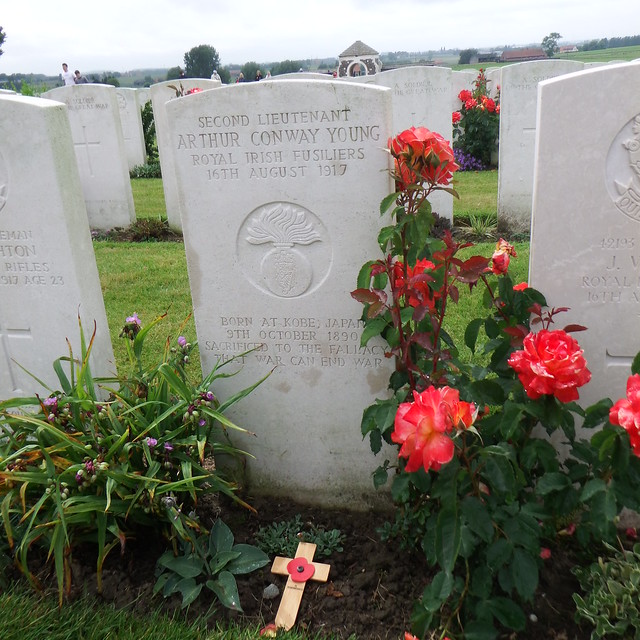