The person, company, or government that brings a lawsuit or defends against one is called a “party.” A party has a claim (you might also hear “cause of action”) if it has some legal basis for seeking relief from a court for the actions of another party. In a civil case, the cause of action usually arises from:

In a civil case, the party seeking relief from the court is the plaintiff, and the party against which the plaintiff seeks a judgment is the defendant. In a criminal case, the party seeking the court’s action is the government (usually in the person of a prosecuting attorney), and the other party is still the defendant. Criminal cases arise from the defendant’s alleged violation of a statute or agency rule. The relief sought by plaintiffs in civil cases is either money damages (sometimes called remedies at law), or court orders or injunctions (sometimes called remedies at equity), or both. The relief sought by the state in a criminal case is imprisonment of the defendant, or payment of a criminal fine, or both.

When a plaintiff brings a claim against the defendant, the defendant can bring other claims, too. As a result, there can be many parties in a civil lawsuit: 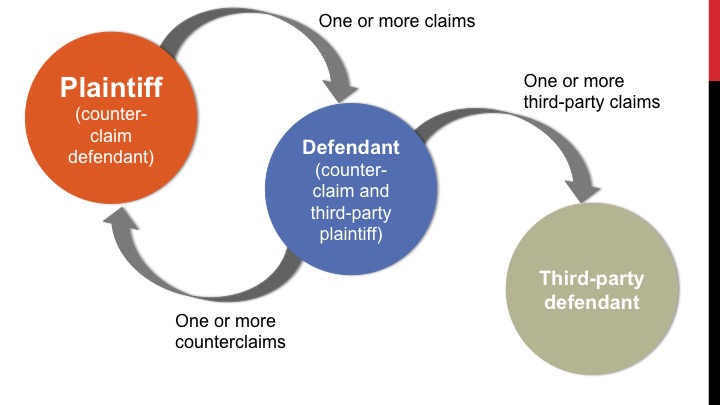 As long as any of the claims made by any of the parties has not been disposed of, the lawsuit is still alive; the plaintiff cannot get out of the counterclaims, for example, merely by dropping its claims against the defendant.